James Dickerson aged 25, labourer from Wistow, was today given a sentence of four years penal servitude for killing a ewe with intent to steal part of the carcass. The ewe belonged to George Pryme Esquire, also from Wistow, and was stolen in April 1854.

Joseph Phillips, shepherd to Mr Pryme, was alerted to the slaughter of the sheep by Police Constable Joseph Yates. They went together to Raveley Hole where they found the carcass. In his deposition Joseph Phillips said, “I found one of the ewes had been slaughtered and a piece of the carcass taken away, it was taken from the left front leg and one of the ears was also cut off. Joseph Yates showed me that morning a piece of meat and a sheep’s ear, which I have no doubt had been taken from the ewe belonging to my master”.

That Sunday morning between one and two o’clock James Dickerson had turned up at the station house in Huntingdon. He sat on the steps of the station house saying he was tired and couldn’t go any further because he had “been to Wistow and killed a sheep”. It was clear to the constable that Mr Dickerson was telling the truth because his hands were covered in blood and he had a bloody knife on him. He also produced a piece of meat and an ear!

When asked James Dickerson said, “he could get no work and wanted to be sent out of the country”. The evening before Mr Dickerson had approached Mr Woodruff for work, but was given a four penny piece and told to go to Mr Saunders to try and get a job. Mr Saunders turned Mr Dickerson away and in desperation he had tried to catch one of Mr Saunders’ sheep but failed. Constable Yates felt the prisoner was “quite sober” when he was at the station. The Constable went on to say that Joseph Phillips, shepherd, had showed him the ewe’s carcass and his comment was “I patterned the ear myself and it exactly fitted”.

Having heard the evidence against him James Dickerson’s comment was “ I was not quite sober when I did it. I have nothing more to say”.

James Dickerson’s grave can be found in the churchyard 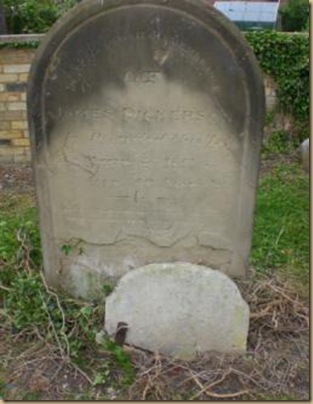